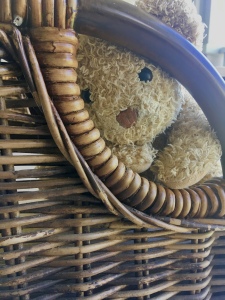 Abigail sat by the window.  She raised her paws straight up in the air, then back down again.  Then she did it again.  Twisting around she looked over the cushion through the arm of the wicker chair.  It was impossible to sit still.  With a loud sniff, she kicked the cushion aside and clambered up. It still wasn’t dark, why was it taking so long? Patrick was taking her back to the shop tonight, to pay for the things in her bag and to get her red car.  It was very exciting.  Grigs though, had been told firmly he couldn’t come.

‘He’ll get in the way,’ Patrick had said, ‘and he’ll bounce all over the place, he’d better stay here.’

Standing up on tiptoe, Abigail looked out of the window into the street.  It was very quiet.  It must be dark soon and then they could go.  Patrick seemed to know where the shop was, but it did feel a bit strange to be going back.  Suppose someone saw them?  Or… she paused thoughtfully, suppose her red car wasn’t there anymore?  Suppose someone had bought it and taken it away?  That would be awful.  There was a loud crash downstairs.

‘Grigs I told you not to bounce on the table!’

Jumping down, Abigail padded out of the room. The polar was pacing too and fro, waving his paws in the air. ‘Do you think we’re made of plates? That’s the third one you’ve broken this week.’

Grigs sniffed.  ‘It was in the way, it wasn’t my fault, it was right under my bounce.’

‘Tigers DON’T bounce!’ shouted Patrick, ‘they never ever ever bounce!’  Grigs bounced high in the air.  Patrick put his head in his paws and groaned.

It felt like the time to leave would never come, but finally it was dark.  Abigail didn’t even feel like eating, she’d made herself a nice sandwich, but she’d left most of it on her plate. As she made her way along the hall she felt an odd fluttering in her stomach.  Wrapping her orange scarf around her firmly, she licked her lips.

Patrick was already standing by the door, a piece of paper in one hand and a torch in the other.  ‘Well come on then, it’s time to go.’ Grigs bounced down the hall. ‘Not you,’ said Patrick without looking around.

The tiger snorted. ‘Didn’t want to go anyway.’  Pointedly, he turned his back and climbed up onto a table, waving his tail too and fro. Sitting down he started muttering to himself. Patrick ignored him.

‘What’s on the paper?’ asked Abigail.

‘It’s a map,’ said the polar, smoothing it out carefully, ‘l drew it to make sure we don’t get lost.’

Clambering up onto the radiator, he leant forward and pulled open the door.  A draft of air blew Abigail’s fur back from her face. It was very cold outside.  Jumping down, Patrick climbed down over the step. ‘Come on, no time to waste, follow me.’  Standing up tall, Abigail reminded herself that she was a very brave bear and padded out of the door.

The street was dark and very quiet. Looking down at the map Patrick patted it carefully.  ‘Keep close to the hedge, if you see a car, then hide, we don’t want anyone to see us.’ Abigail nodded. There was a thud behind them and they both ducked.  ‘Come on,’ hissed the polar, ‘and be quiet.’  Abigail wrinkled her nose.  It wasn’t her, she hadn’t made a noise.  Steadily she tiptoed along the pavement. Her ears twitched and she glanced over her shoulder, she thought she heard something again. The leaves in the hedge behind her shook slightly then stopped.  No, nobody there, it must be the wind. Patrick was already a little way ahead, his white fur shining in the dark and she hurried to catch up with him.

To Abigail’s surprise it didn’t take nearly as long to get back to the shop as she’d thought it would. She must have been very lost when she ran away, she’d seem to walk for ages and ages.  Before she knew it they were standing by the street lights outside of her shop window.  Patrick stood up onto the tips of his paws and peered in. ‘Is this it?’ Abigail nodded slowly.  The window display had changed.  A rabbit, a spotty dog, a giraffe and what looked like a unicorn now stared out into the street. She raised a paw and waved. Nothing. She sniffed loudly. Obviously still all stuffed.

‘Ssshhhh’ said Patrick waving a paw at her, ‘stay quiet and stop waving your paws around like that!’

‘I only sniffed,’ said Abigail loudly, ‘there’s no one here, and my paws wanted to wave.’ She started to do a little dance to keep warm, and to annoy the polar.

‘Well follow me,’ whispered Patrick, ‘and don’t expect me to rescue you if you get seen, bears don’t sniff or wave.  Let’s go round to the back.’ Abigail wriggled her nose at him but followed anyway. The alley was dark and she put a paw on the cold wall to steady herself. It was damp and she brushed her paw on her scarf.  Turning on the torch with a loud click, Patrick beckoned to her impatiently as a beam of light lit up the alley.  They made their way down towards a small square of grass.  Patrick swung the torch around, shining it up onto the back door of the shop.  He seemed to be muttering to himself, ‘must be around here somewhere.’ He looked under a flower pot, shook his head, then lifted up the door mat.  ‘Ah hah,’ he held up a key, ‘never fails,’ Climbing up onto the pot, with a leap he landed on the door handle.  Pushing in the key, he leant on the handle and the door swung open. Jumping down he handed her the key, ‘here take this.’ He pushed a box towards her ‘and wedge the door open too.’

Taking the key, Abigail wasn’t quite sure what to do with it, so bending down she put it back neatly under the mat.  Climbing over the step into the shop, she dragged the box against the door to keep it open.  At least they could leave quickly.  Patrick was shining the torch around and Abigail blinked.  She took a deep breath.  There it was!  It all looked so familiar, she could see the same rows of toys, it hadn’t changed at all. Looking up she could see the jigsaw she used to sleep behind.  Before she’d met Patrick and Grigs this had been her home. She swung around.  The cafe!  With it’s little red chairs.  Taking a step forward she licked her lips, maybe there would be cakes.

‘Its down here,’ whispered Abigail excitedly.  Spinning around again she ran towards the back of the shop.  Her scarf took the opportunity to unwind itself and she stepped on it hard, flying forward.  There was a loud crash.

‘Was that you?’ hissed Patrick, ‘I said be quiet!’

‘No that wasn’t me,’ hissed Abigail back in annoyance, trying to untangle herself from wide folds of orange scarf. ‘It definitley wasn’t me.’

Something went thump thump thump. Swallowing hard Abigail sat up.  ‘What was that?’  There was a loud ‘ow!’ silence and then another crash.

‘I’m here!’ said Grigs loudly, ‘where are you I can’t see you it’s all dark.’ There was another loud bang and the door slammed. ‘Ouch! There was a box here.  But it’s not here any more,’ he added. ‘Stupid place to leave a box, I’ve bounced it out of the way.’

‘Abigail,’ said Patrick with a sigh, ‘give me the key back.’

Abigail shuffled uncomfortably from paw to paw.  ‘It’s not exactly… well I don’t have it just at this very moment.’  Patrick narrowed his eyes.  ‘Well you weren’t very clear!’ Abigail said defensively. ‘So I put it back under the mat.’

The polar put his head in his paws. ‘I don’t believe it. We’re locked in… now what are we going to do…’. There was another loud crash.  ‘And Grigs is here too..’