The first thing that Abigail noticed about being outside was that it was wet. Very wet. She’d often seen the rain on the shop window. The water used to slide down the glass and over the pavement, but she hadn’t realised how cold it would feel on her fur! Shivering she shrank up against the bricks under the window. Perhaps this wasn’t such a good idea after all. Pulling out the orange scarf she wrapped it around her, it was very long and she tripped as it wound itself around her paws.

‘Stupid thing,’ she muttered to herself crossly, shaking out her paws and trying to untangle herself. With a glance back into the warm shop she took a deep breath. What was she? A bear or a mouse? Pulling the beach bag straps firmly over her head she looked down the road. Which way to go? It didn’t really seem to matter so with a deep breath she turned left. The road was lined with shops and as she passed each one she looked inside for other bears. Standing up on the tips of her paws and tilting her nose, she peered into the windows. Some had vases and pots, some had flowers and one had a room full of tables that even outside smelt deliciously of food. Sniffing, Abigail pressed up against the wet glass. No bears. Only people. She shivered again. It really was very cold and the rain was now starting to soak through her scarf.

A car swept down the road with a loud roar, spraying water from its wheels. Abigail backed up against the wall. When the road was quiet again she started to drag the beach bag back along the pavement. She really wished she hadn’t packed so much, the cover had slipped and in the dark the flashing lights on the tree seemed very bright. Ahead she could see some other lights on tall poles, red at the top. The lights blinked, turning orange then green and she set off again towards them. After a while another car purred up behind her and she backed into a doorway. The car stopped in front of the red lights and Abigail peered out around the brick wall.

The window on the car slowly wound down. ‘I tell you it was a bear, walking down the pavement, I saw it!’ said a woman’s voice. The car began to reverse towards her. Abigail squeezed back into the darkness. There was a cardboard box in the corner and she put her paws inside, it was full of bits of paper. Picking it up quickly she tipped it over her head. It was very dark inside. She held her breath. From the car she could hear voices arguing.
‘Chloe there is no way you saw a bear walking down the pavement.’
‘I did,’ said the woman loudly, ‘it was all orange and it was carrying a blue beach bag.’
“And where is it now then?”
“I don’t know, it must have run away.”
Abigail felt faint, she was still holding her breath. The car window wound up.  With a cough she gasped and then sneezed hard. It was very dusty in the box. And now she was covered in bits of paper. The car moved away. Abigail pushed the box up over her head onto the ground and shook herself. Strips of paper were all over her fur. Trying to brush them off, they stuck in her claws and she waved them around in the air.  Not far away the car had stopped in front of the red lights. Creeping up behind it she kicked the tyre on the back wheel. Hard. Stupid car! With a low growl it moved off and she scuttled quickly back into the doorway.

As the night wore on Abigail felt more and more annoyed. This was nowhere near as fun as she’d thought it would be. She was cold, wet and her scarf had unwound and was now trailing behind her like a long wet orange tail. Her cakes were all squashed and she wanted to go back to her nice warm hidey hole behind the jigsaw. Except she had no idea where that was. She was a very brave bear and she wasn’t frightened but she was also a very tired bear. It had stopped raining but her fur was soaked and her paws hurt. The shops were gone, she was lost in streets full of small brick houses, some with curtains open and warm lights reflecting off the big dark puddles on the road. But there was no sign of any other bears. Where was she going to sleep? She was so very tired. If she could curl up somewhere warm and dry she was sure it would all be better in the morning.

Leaning against a small metal gate Abigail looked down a path into a garden with a thick hedge. Under there? It looked very dirty. No, not there. Something made her pause and she glanced wistfully up at the house. There were no lights on, perhaps it was empty and she could find a way in. All the houses looked warm when you were in a cold damp street. The clouds parted and the bright moon came out. There was a movement at the window upstairs. Someone was in, she couldn’t stop here. Abigail sighed heavily. Looking up again she wrinkled her nose. Wait. Was that…someone waving? There it was again, but she couldn’t quite see. The beach bag slipped from her grasp and some of the marbles rolled down the path with a clatter. No it couldn’t be…. surely it couldn’t be… In the bright moonlight behind the window, was… a small white polar bear. Just like the ones in the shop. 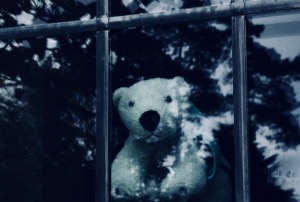 But…’no…’ breathed Abigail. Not like the ones in the shop. Not at all. This one was…waving at her. Trembling, she raised a hesitant paw. The polar bear pointed down towards the door and disappeared from view. Swallowing hard Abigail edged up the path. The quiet of the street was broken by the noise of a chain rattling, followed by a loud click. The door swung open. With a soft thud the polar bear jumped down from the handle. They looked at each other.

The polar sighed. ‘You’re covered in bits of paper. And very wet.’ It shook its head disapprovingly. ‘Still I suppose you’d better come in.’ Dropping to all fours and scuttling past her the polar bear collected up the blue marbles. ‘Very dangerous,’ it muttered, ‘someone could trip. Come on in then, it’s warmer inside.’

Abigail’s eyes were wide as hauling her beach bag behind her, she climbed over the step. She knew it. She’d found one. Another real live bear.