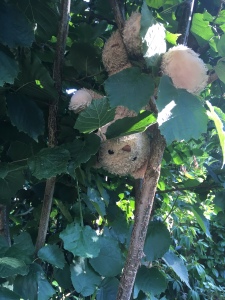 Sitting on a cushion, Abigail looked out of the window kicking her paws hard against the table. She was very annoyed. Just when she’d found a house with another real bear, a very rude tiger had appeared. She sniffed loudly, what had he said? That he didn’t think she was stripy enough, as if that mattered. And that she couldn’t bounce. Wouldn’t bounce, she corrected herself, she was sure she could bounce very well if she wanted to.

Clambering up onto the table, the polar bear looked at her. ‘Don’t mind Grigs, he’s not very fond of new things happening to him, he”ll get used to you.’

‘But will I get used to him? said Abigail loudly, ‘he was very rude.’ She wrinkled her nose and sniffed again. Patrick seemed nice even if he was very bossy, but that tiger hadn’t seemed very friendly at all. Did she really want to stay here? Looking around the bright room, she reached out and wriggled her paws against the soft bed with its comfy cushions. She thought about the hot chocolate and the biscuits. She thought about her hidey hole behind the jigsaw back in the shop and how quiet it had been. She thought about how she’d unpacked all of her things, even if they were hidden under the bed. Perhaps she should stay for a while. ‘Well perhaps it will be all right,’ she said more happily. Her stomach growled and she paused, ‘is there anything else to eat, it must be nearly lunch time.’

‘Follow me,’ sighed Patrick, ‘let’s see what’s in the fridge.’

The days passed quickly. The house was empty most of the time and Abigail felt very comfortable. It was much nicer than the shop. It had three rooms upstairs and a shiny white bathroom. The kitchen was downstairs, next to a big room to sit in with two blue sofas. Patrick spent most of the time in the kitchen sitting on the table, tapping away at the laptop and occasionally muttering to himself. Grigs seemed to have got used to her and once had even offered to show her how to bounce. She’d declined politely, she felt that blonde bears didn’t really bounce.

It was the garden though, that Abigail really loved. She’d never seen grass and trees before, the shop’s window had just looked out onto the street. A wide path led down to a big wooden shed. There was an overgrown flower bed on one side, on the other a mass of thick green bushes. A strip of long grass in the middle led to a huge tree. Tied onto its branches were two pieces of rope and a flat piece of wood. It was a swing. Abigail hadn’t actually known what a swing was until the polar had explained. He’d helped her push a big wooden box over so that she could climb up and sit down. Then holding on tight she pushed off of the box with her paws. She felt like she was flying. Up and up, higher and higher until she looked down and the garden seemed so small. Higher and higher… it was her favourite thing, it was even more fun than the red car she’d had in the shop.

After breakfast one day Abigail looked out into the garden. It was very sunny. The swing waved enticingly in the breeze. She was full of hot chocolate and biscuits and felt very content. Some time on the swing would be just perfect. Clambering down from the table she pushed open the door.

‘Careful,’ called the polar without looking up, ‘mind you don’t fall off.’

Abigail ignored him, he said that every time she went out, and as if she’d ever fall off. Climbing up onto the box she sat down on the seat and pushed off hard. Higher and higher.. the rope jerked under her paws and she tightened her grip. This was such fun. As she flew up she could see the stripes of the tiger below, he seemed so small. She hadn’t realised he was out in the garden. As the swing came down, he got bigger and bigger. ‘Oh no,’ she muttered, he was right by the box. ‘Grigs look out!’ Startled, Grigs looked up and as Abigail swung towards the ground, he bounced, hitting the underside of the swing hard. Catapulted up again into the air Abigail clung on tightly. She’d never been so high before. She was almost upside down. ‘Oh dear,’ she muttered, feeling very dizzy. It appeared she actually was upside down. Her paws began to slip down the rope. ‘Ohhhhh…’ Everything seemed to happen very quickly, one moment she was on the swing and then suddenly, she wasn’t. ‘I’m flying!’ shouted Abigail, ‘look I’m really flying!’ There was a loud crash, then everything went dark. Well not dark exactly, more green. Blinking, Abigail looked around, she wasn’t flying anymore but the world was still upside down. What had happened. Where was the swing? The sky seemed very blue but there were a lot of leaves in the way. She raised a paw to push them aside.

Abigail froze, one paw dangling in the air. A tree. This was annoying, she’d been having so much fun until that tiger had bounced into her. Twisting her head she looked down. Patrick was running round in panicky circles down below her. ‘Are you all right? Grigs come back here right now this is all your fault!’

‘Wasn’t,’ muttered the tiger, from under a nearby bush ‘she was in the way of my bounce.’

‘Come out here and help me get her down!’

Abigail swayed slightly in the tree, The ground seemed a very long way away, how was she going to get down. She licked her lips. Patrick had disappeared.

A long stick appeared in front of her face. It waved back and forth then poked her hard on her nose. ‘Owww!’ 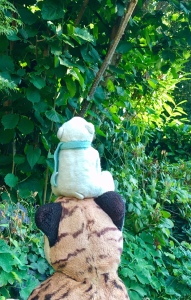 ‘Sorry,’ shouted Patrick, ‘we’re on a box I can’t get any higher, can you grab hold of it.

‘No,’ said Abigail crossly, ‘I can’t.’ With her free paw she pushed the leaves out of her face, perhaps if she could reach that branch just there… Leaning out a little bit further she stretched out as far as she could. Almost.. With a sudden snapping of twigs and a rush of leaves Abigail’s paws slipped. ‘I’m flying again!’ she shouted, ‘look out!’ With a whoosh and a thump, she came to a sudden stop.

Opening her eyes she looked up at the blue sky. She was back on the ground, and it hadn’t hurt much at all, perhaps it hadn’t been so high.

Abigail looked down, she was laying on something soft. Sticking out beneath her was a stripey tail. She prodded it with her paw. ‘Grigs?’

Beside her Patrick was curled up on the ground, waving his paws in the air. He was laughing really loudly. Abigail brushed at her fur self consciously, it was full of leaves. Clambering up, Patrick wiped his eyes with his scarf. ‘Serves you right Grigs, you got her into that tree.’

Abigail stood up. Beneath her the tiger clambered to his paws, swaying slightly. Shaking out his tail he sighed. ‘You’re very lucky I was there,’ he took a unsteady step forward, ‘but do try not to do that again.’ With his head held high he stalked off.

This site uses Akismet to reduce spam. Learn how your comment data is processed.