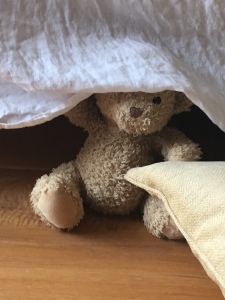 Abigail woke up very slowly. She was warm and comfy and she stretched out her paws lazily, wriggling them against a soft blanket. Opening her eyes all she could see was a fuzzy yellow haze. Where was she?

‘Good morning, what are you doing under there, it’s really not cold.’ Abigail pushed at the yellow blanket, that somehow had got tangled around her ears and over her head and sat up. Rubbing her eyes with her paws she blinked. The small white polar bear was sitting on the table next to her with a mug of something that smelt like hot chocolate and a plate of biscuits. ‘I’ve dried your things, they’re over there next to that huge bag. What on earth have you got in it?’

Abigail eyed the biscuits and reached out a paw. They looked delicious. ‘All my things,’ she mumbled through a mouthful of crumbs.

The polar peered into the bag. ‘There’s a pink Christmas tree in there.’

Abigail nodded, licking her lips. ‘It’s got lights and there’s some marbles and … useful things.’

The white bear looked at them doubtfully. ‘They don’t look very useful to me.’

‘They are,’ said Abigail, putting down the biscuit crossly and reaching out a paw to pull the bag towards her. He might have bought her breakfast but she was finding the polar a bit annoying. ‘They’re all very useful.’

‘Did I tell you my name was Patrick?’ said the bear. ‘When I rescued you last night?’

Abigail nodded, picking up the biscuit again. ‘But I didn’t need rescuing, I was quite all right.’

Patrick rolled his eyes. ‘Oh yes, wet, lost and covered in bits of paper. I saw you from the window and opened the door. There are people who live in the house too but they’re away again, they’re not here very often. It was a rescue. Definitely. Without a doubt.’

Abigail wondered what a house really was, perhaps it was like a shop but there didn’t seem to be many shelves full of things around. It was true she had got a bit lost last night, as it had been so very cold and wet. But she hadn’t needed rescuing, she was sure of it. The polar bear was turning out to be a bit annoying. ‘And do the people know you’re real?’

The polar shook his head hard. ‘Oh no, of course not. They wouldn’t understand. But it works out very well. We have the place to ourselves when they’re away and even if they are here, at night they’re all asleep.’

‘Yes,’ sighed Patrick, ‘you”ll see, they took him with them but he’ll be back later. I’ll leave you to it, just make yourself at home, I’ve got things to do.’ Climbing carefully down from the table he padded out of the room.

Finishing the biscuits and drinking her chocolate Abigail looked around. The bed she was sitting on was soft and piled with yellow cushions. The room was painted yellow too, with big wide windows that looked out towards other houses. There was a shelf full of books and a wooden set of drawers. It smelt both clean but also of a little bit of hot chocolate and biscuits and she sniffed hopefully. No, they were all gone, she’d eaten them all and she climbed down from the bed. Stretching up on her paws, she reminded herself that she was a brave bear, she must start to explore. But firstly she should unpack, she wasn’t sure the bag really was dry.  Looking around she decided to hide her things under the bed, she didn’t want that polar going through them, he obviously had no idea what was useful and what was not. Brushing out her fur with her paws until it was soft and shiny, she climbed up and looked out of the window. There was nothing really to see, just an empty road, some cars and a few green bushes. Wrinkling her nose thoughtfully she stared down the street. Was this what the outside was like? The shop had been much more interesting than this, but at least she’d found another live bear, even if it was a bit bossy. Wandering out of the room Abigail made her way down the stairs. Trying not to catch her claws in the fluffy carpet she peered around the corner. The polar was sitting on the kitchen table with the thing he called a laptop open in front of him, his claws making a clicking sound as he tapped on it.

‘I’m here,’ said Abigail loudly and rather obviously. ‘What are you doing?’

‘Research,’ said Patrick, not looking up. ‘It’s important to know what’s going on.’

Abigail climbed up onto the table and sat down beside him. ‘Going on where?’ On the screen was a big map, with lots of colours on it. She didn’t really understand what it was and she tilted her head hard to one side. Maybe it was upside down. Or maybe it wasn’t. She had an idea. This would impress the polar. With a neat flick of her paws she rolled over and stood on her head, it was something she’d learnt to do in the shop and she was rather proud of it.

The polar looked at her and sighed.

There was the sound of a car in the street and Abigail tumbled down. She felt very dizzy, perhaps standing on her head hadn’t been such a good idea. The front door rattled.

‘Quick! Run!’ said Patrick, slamming the laptop shut. ‘They’re early I didn’t expect them back so soon. Follow me, fast!’ Scampering down from the table he raced for the stairs. Abigail ran after him. Patrick shot into the yellow room. ‘Get under the bed, this way!’

Abigail dived across the floor, sliding along the carpet on her stomach and hitting her head on her Christmas tree. A sharp branch went right into her ear. ‘Owww!’ Rubbing at her fur, she lifted up the sheet and peered out.

‘Stop that,’ hissed the polar, pushing her backwards, ‘put that sheet down and be quiet!’

Downstairs someone laughed and the kitchen door opened. There were steps on the stairs and Abigail backed towards the wall, her heart beating fast. Beside her the polar put a small soft paw on her arm. ‘Don’t move,’ he whispered, ‘they won’t stay long.’ With a thud a large brown bag landed hard on the floor in front of them. One of the cushions on the bed fell down on top of it.  Abigail swallowed hard.  The room went quiet, and she held her breath.

The bag bounced and the yellow cushion wobbled. Abigail’s eyes went wide and she let out her breath suddenly with a whoosh. She put a paw over her mouth to muffle the sound. The polar sighed. ‘Hello Grigs, we know you’re in there. Did you have a good trip?’ A stripy paw appeared around the cushion, followed slowly by two ears, and a pink snout. 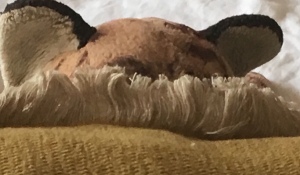 ‘Pleased to meet you,’ said Abigail swallowing hard. She wondered what tigers ate. Narrowing his eyes, Grigs looked at her hard.

‘Don’t worry, he doesn’t bite,’ said Patrick, as if reading her mind, ‘but he is a bit bouncy.’

‘Tigers bounce!’ said Grigs loudly, ‘and who’s she and what’s she doing here?’

‘No they don’t bounce!’ snapped Patrick. ‘They never bounce, I keep telling you that. Tigers stalk, they never ever bounce. Ever!’ He turned to Abigail with a sigh. ‘He watched a film about a tiger called Tigger, who was always bouncing so that’s what he thinks he should do. He won’t listen to me.’

‘Oh,’ said Abigail faintly, it was all a bit much. A live polar and now a live tiger.

‘This is Abigail,’ said Patrick, ‘and you’re very rude you should introduce yourself properly. She used to live in a shop. I rescued her last night,’ he added proudly, ‘she was very lost.’

The tiger looked her up and down. ‘You’re not very stripy.’

The tiger sniffed. ‘Can you bounce?’

Grigs stared at her for a while and then pointedly turned his back. ‘Well that settles it then,’ he said to the wall. ‘You can’t live here, I’ve decided. You’ll have to go back to the shop. Goodbye,’ and with a single big bounce, he was gone.

This site uses Akismet to reduce spam. Learn how your comment data is processed.